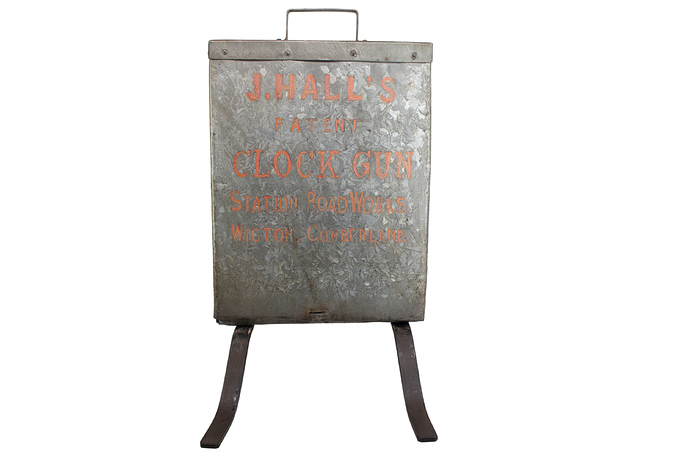 John H. Hall was a US gunsmith that invented a hybrid breechloading and muzzleloading rifle adopted by the US Army in 1819. But that’s not who we will be talking about. The John Hall we will be talking about was an auto mechanic. He lived in the small town of Wigton, Cumberland (present day Cumbria), in northwest England. Wigton had a population of 4000 people and was designated as a market town which gave it the legal right to hold a weekly market. In the late 1800s and early 1900s there were a lot of agricultural activities in the surrounding area including notable berry farms, livestock farms and many other types of farms.

John Hall owned a company called Station Road Works which was located on Station Road and very likely was the building that is the current Station Road Garage. 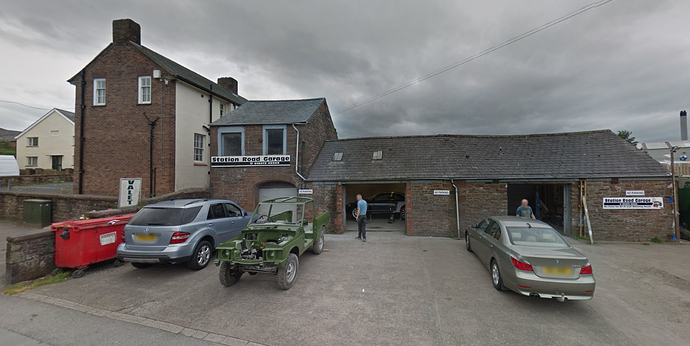 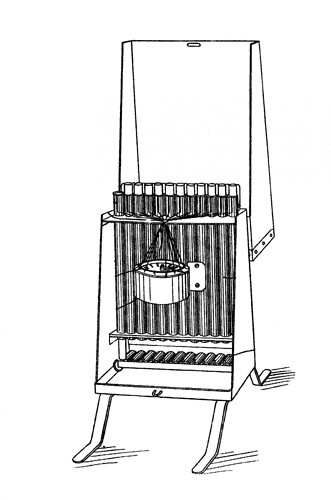 On April 2nd in the year 1902, Hall applied for a British patent for “Improvements in Apparatus for Scaring Purposes, Especially Applicable for Scaring Birds.” His application mentions existing similar devices that used a clock and had hands attached to levers that would release weights. He mentioned that these devices were very expensive and prone to wear over time. He also mention the dangers of how each barrel was loaded at the muzzle and detonated by a cap and that sometimes people would steal or mess with the powder since everything was loaded from the outside. 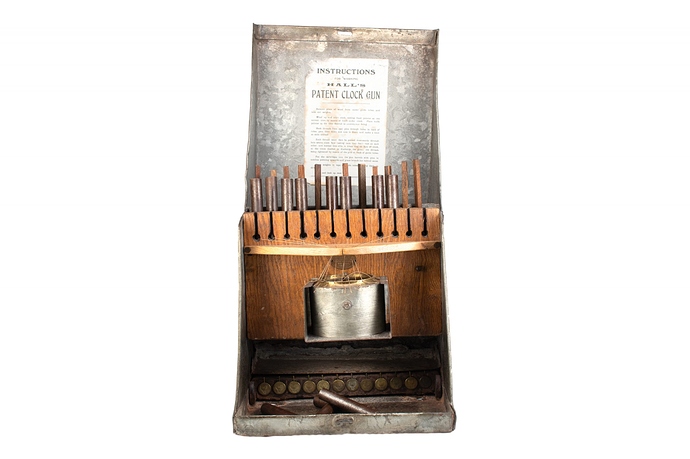 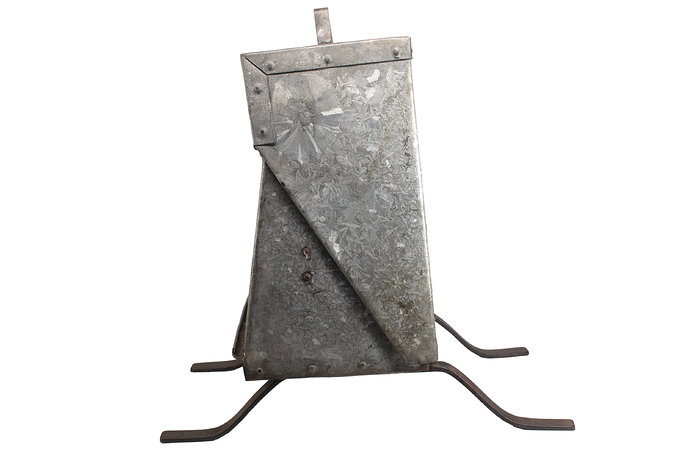 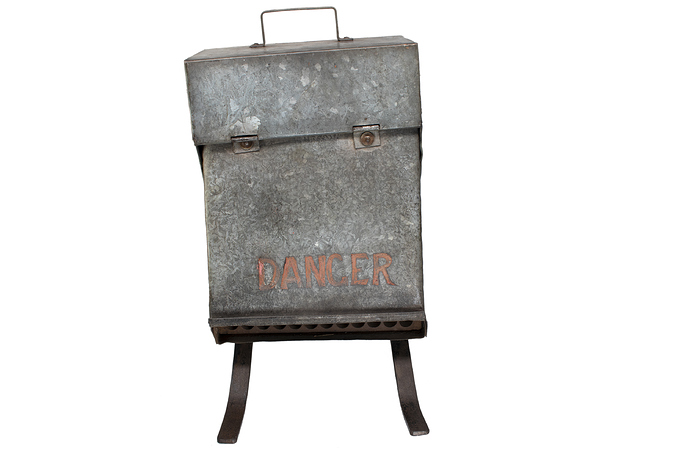 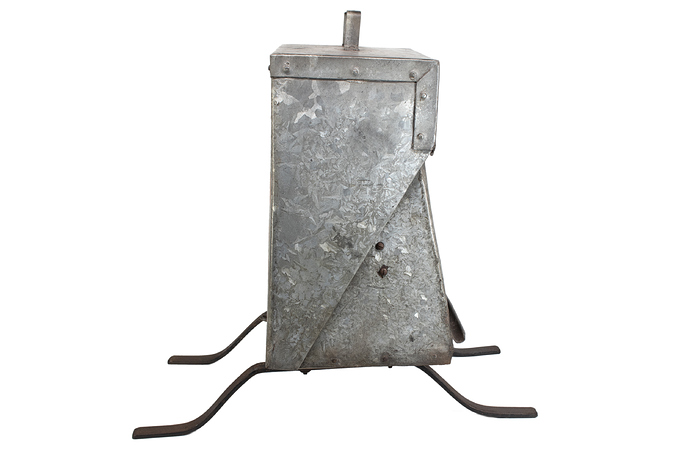 His new invention cost 60 shillings which would be about £371 (or $480) in today’s money. He highlighted how his use of breech loading pinfire cartridges were easier and safer. The charge could be measured ahead of time and the cartridges were not able to be meddled with from the outside since the whole device could be locked. 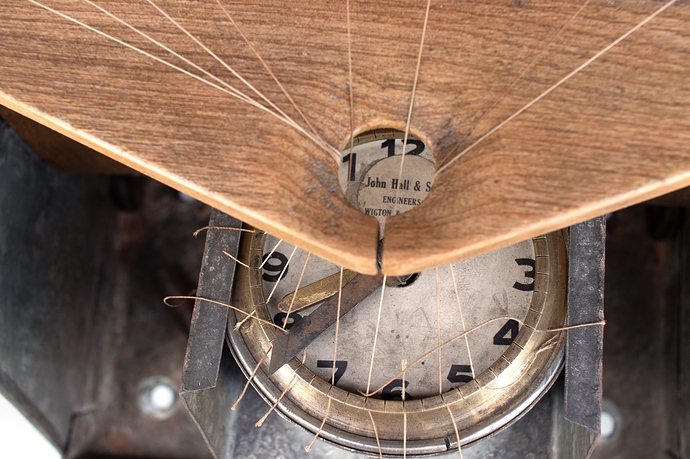 One of the key aspects was changing the the mechanism that allowed the weights to fall and detonate the cartridges. He did this by replacing the hour hand with a razor blade that would cut the strings that held up the weights. In the patent he mentions other methods of this which had a sturdier cord attached to the weights and a spring mechanism that released the cord from the clock rather than cutting it. I recently found an example of this version as well and will write about it in a future update.

As shown in the video above, you would attach the string to whatever 15 minute interval on a 12-hour clock you wanted the charge to go off. You would then tighten it and rest the weight on the string. When the razor hand would cut the string the weight would act as a gun’s hammer and would fall onto the pin of the pinfire cartridge and detonate it. 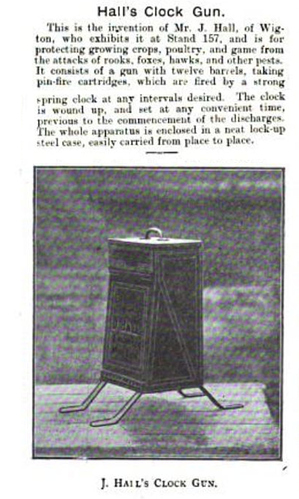 Hall debuted this new invention at the 63rd annual Royal Agricultural Show hosted by the Royal Agricultural Society of England. This July 1902 show was held in Carlisle which was only about 20 minutes away from Wigton. His clock gun won a silver metal (the only type of medals the society awarded) for “new and improved implements.” Later that year same year the periodical, The Agricultural Economist , reviewed his device and called it “exceedingly ingenious.” They mentioned its use for replacing scarecrows and other “old-time methods of protecting crops from the ravages of birds, etc.” 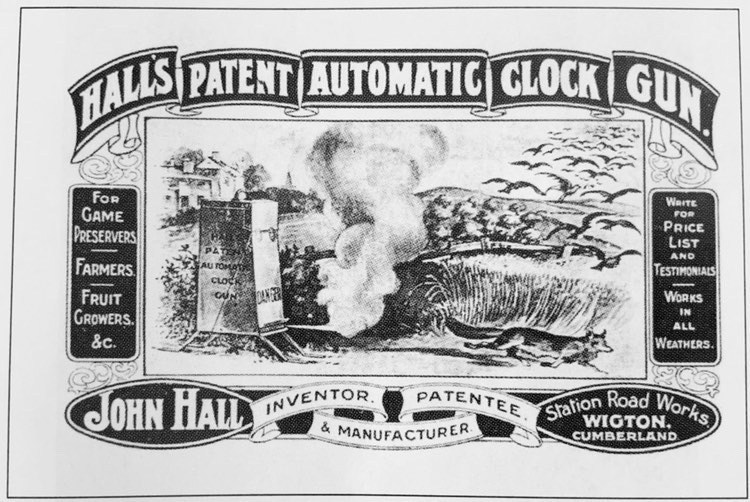 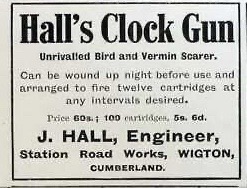 On December 4th, 1902, his patent was finally granted and given patent number 7756. The device itself is pretty big. it is heavy and is about 2 feet tall! Hall mentions that he manufactures them himself and even the legs have his company name stamped into them. 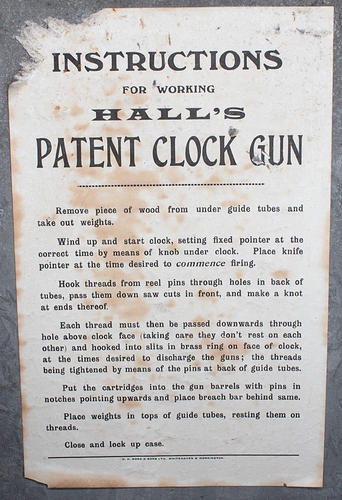