Hi,
I wonder if anyone can help, with any information on the following gun?
It’s a 10 bore Pinfire, takedown fowling gun, signed BRICHET, NANTES, there’s no visible serial number, I guess its around1860, It has a heavy octagonal to round 40 1/2in. twist iron barrel detaching from the cradle-form plain action with a twist and pull motion released via a catch, plain back-action lock marked ‘INV.ON BRICHET NANTES’, carved rear-sight channel to back of action, walnut butt-stock, flat-fronted trigger guard and no provision for fore-end.
It seems a very strange design to have to remove the barrel to put in a cartridge, there is no extractor, and you have to manually remove the cartridge, from the barrel.
The gun appears to have a Belgium provisional proof mark, and 19mm stamped on the barrel, it also has a third proof mark, that looks like the letter Y below a crown, I am guessing this is a final proof mark, but I couldn’t find this mark in lists of Belgium or French proof marks.
Hopefully, this is enough pictures to help identify it, as a new contributor, I was limited to the number I could attach. 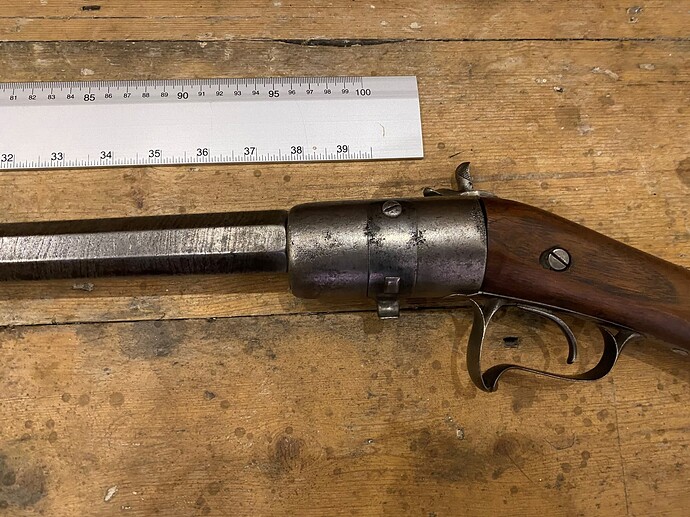 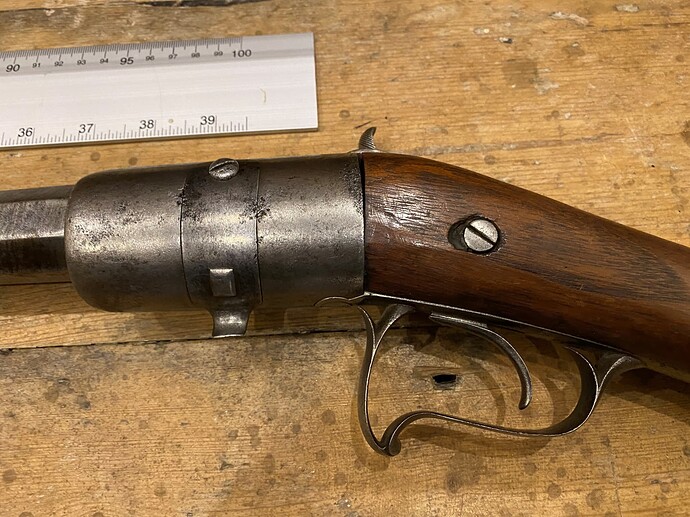 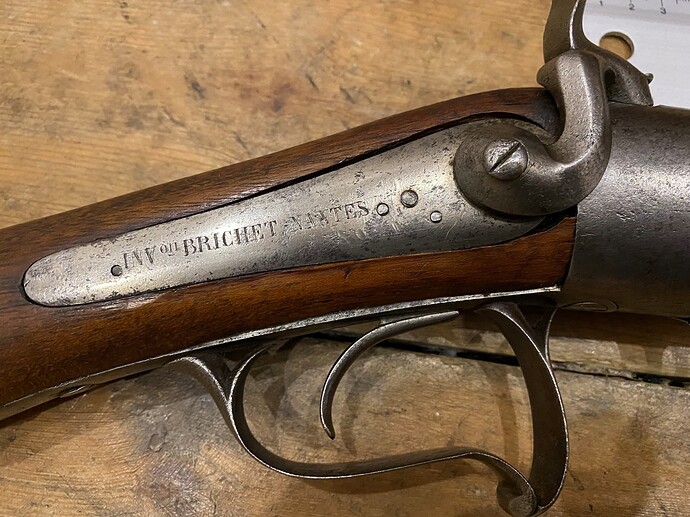 Have had exactly the same in my collection

That’s great, do you know anything about it’s history, or who actually made it, & where & how many were prduced?
Regards
Martin

Hi,
Any information would be great, I’m not in any rush, & am really grateful that you are taking the trouble to reply

Stoeckel mentions a Brichet in Nantes, Loire-Atlantique, at 21 Rue de la Fosse for 1855. The proof marks seem to be Belgian “bench proofs” (ELG*) and inspector’s mark (Crown over Y). That is all I can tell you. Good luck!

Yes that is true, but I didn’t find any connection between the French and Belgium branch…but both branches are gunsmithing … it’s a little world so its possible that they are familly, as I see on your picture …
They Y with his crown is the inspector’s mark of the proof bench of Liège in us before the 1st January 1877.

the french branch filed several patents between 1856 and 1860. 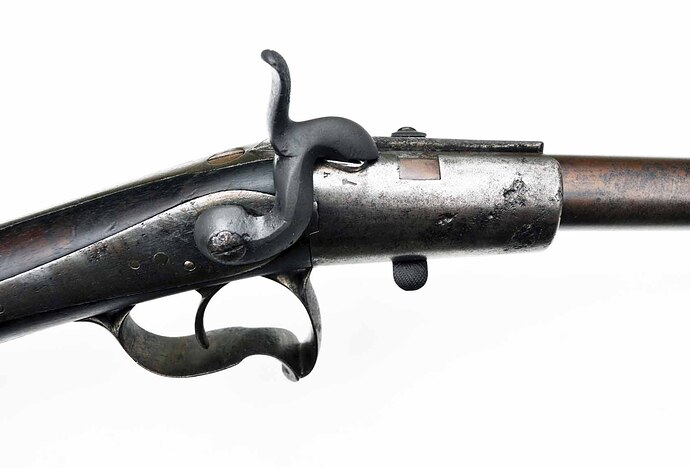 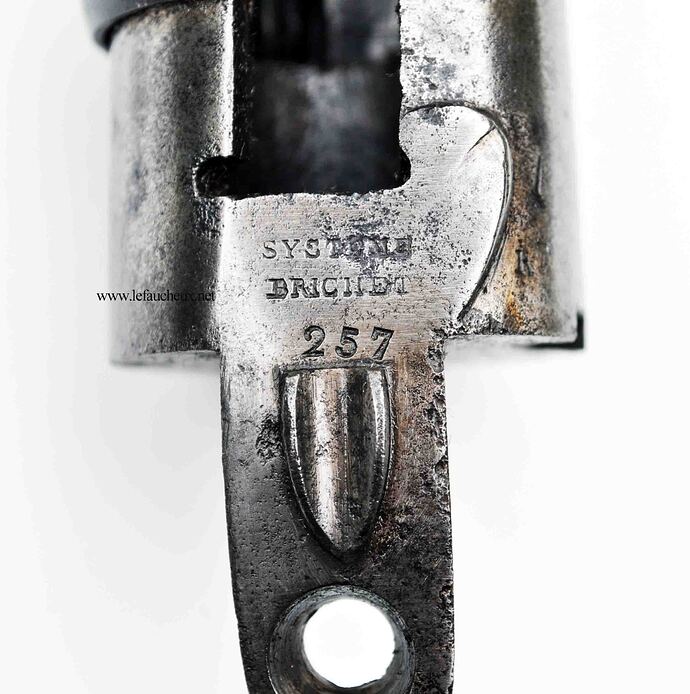 As you can see, several Brichet’s and patents in Liège 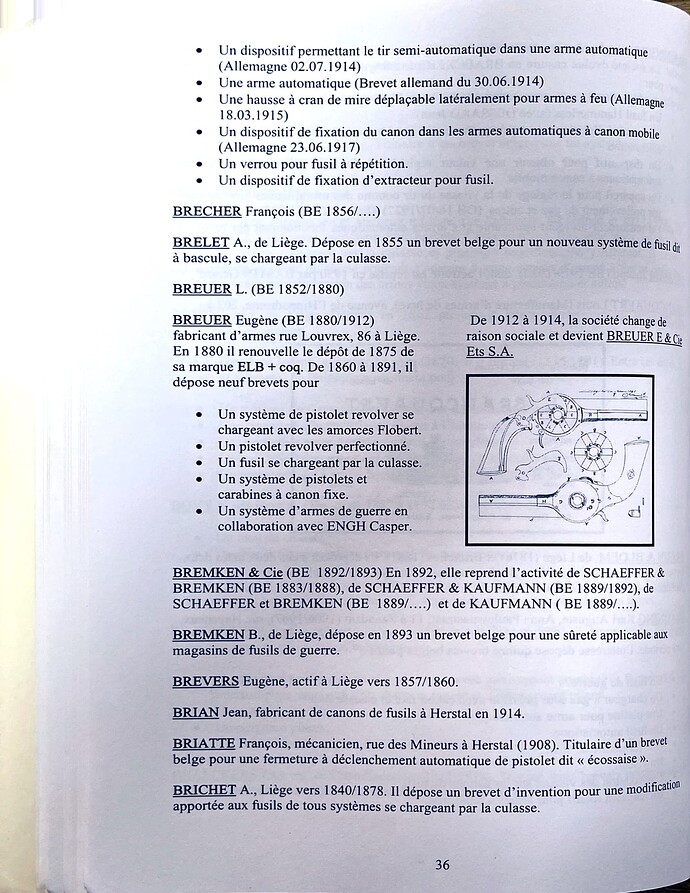 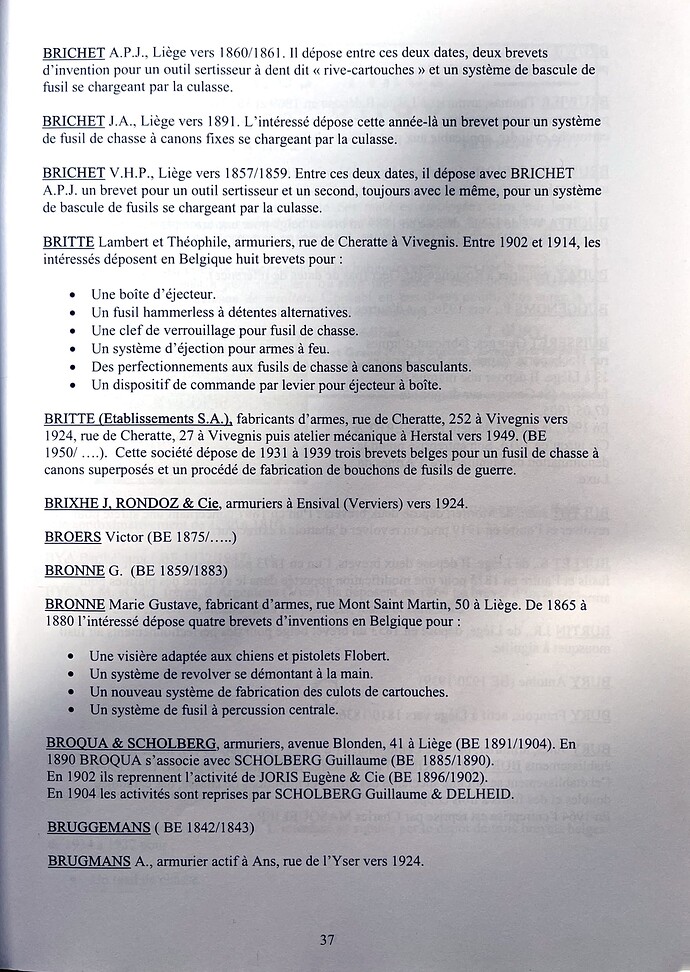 Thanks, that’s really helpful & useful information, & I really appreciate the amount of time you have taken to answer my questions.
Regards
Martin

You will have to translate it, this is a part of the research about the Brichet familly I made a few years ago when I tried to identify my Brichet shotgun .

You will have to translate it, this a part of the research about of the Brichet familly I made a few years ago when I tried to identify my Brichet shotgun .

Thanks, that’s absolutely brilliant, I’m really excited to read it😀
I don’t speak any French, so haven’t got a clue what it says, but fortunately my wife speaks fluent French, so she will translate it for me.
I really appreciate your help.
Regards
Martin

Thanks, that’s absolutely brilliant, I’m really excited to read it😀
I don’t speak any French, so haven’t got a clue what it says, but fortunately my wife speaks fluent French, so she will translate it for me.
I really appreciate your help.
Regards
Martin

Just in case anyone else wants an English translation, of the very useful Brichet family history….

Alphonse Pierre Jacques Brichet was born in the town of Precigné in Sarthe on December 10, 1824.

Installed as a gunsmith in Nantes after 1851 and before 1853 at 20, rue de la Fosse and worked there with his brother Victor.

According to the population census registers of 1856, the Brichet family’s home is located at 1, passage Pommeraye, which forms the corner with number 20, rue de la Fosse.

No one with the same name was listed there in 1851.

Alphonse married for the first time on January 22, 1853 in the city of Nantes with Alexandrine Cécile Matran, born on November 3, 1833 in the same city.

On the marriage certificate, Alphonse indicates that he is domiciled at 20, rue de la Fosse.

Alphonse’s mother settled in the city of Angers between 1853 and 1858.

On December 20, 1856, Alphonse Brichet filed patent n°30158 for a tilting rifle loading from behind.

A second son, Maximilien Jules Victor, was born on February 2, 1857.

His wife Alexandrine died on March 4, 1857, most likely after complications following the delivery of Maximilien.

The same year, on October 21, he filed a new patent, n° 42512, concerning a system of double and single rifles, mainly charging by thunder and uncovering by means of the sub-guard.

In 1867 he participated in the Universal Exhibition in Paris.

On May 9, 1873, he declared the death of his son, Alphonse Maximilien, son of Alexandrine, aged 18, also a gunsmith.

Maximilien Jules Victor will take over from his father as a gunsmith at the same address.

Alphonse Pierre Jacques died on May 14, 1911 at his home, followed by Elisa on June 8 of the same year.

On the death of Georges, it was Jean René who took up the torch of the armoury.

It was finally Jean René who put an end to this 150-year saga around the year 2000 for lack of a successor.

You can always click the translate button on the forum too

Thanks for that, I didn’t realise there was a translate button